Australia’s viral moments in 2022: a courtly cavoodle, a political bulldozer and Cumdog 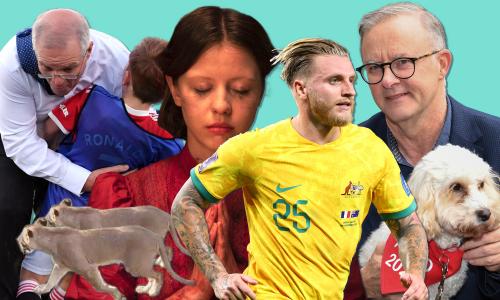 In the future, everyone will be a main character for 15 minutes – or whatever Andy Warhol said. We are now in the future, and as with any election year in Australia, a menagerie of main characters has meandered across our feeds like a pride of lions on the loose from the zoo (more on that later). Here is a recap of 12 months of mayhem.

It was an election campaign brimming with theatrics: dramatic losses, high-profile oustings, and a multilingual dolphin trainer. But amid the turmoil, one low-key character took centre stage: Toto, Australia’s aspiring first dog.

Like microplastics or cryptocurrency, clothing for dogs is a distinctly human invention that contravenes all laws of nature – but Toto maintained a picture-perfect grace even as a Labor-red neckerchief was thrust upon him on the campaign trail by his dad, Anthony Albanese.

The courtly cavoodle proved so popular that one loyal fan started an Instagram account called @totoalbaneseofficial – naming him, lovingly, the “crustiest creature in the southern hemisphere”.

To the chagrin of many, the profile was cruelly nixed by Instagram’s impersonation rules after less than 24 hours. A popular Twitter account posting from Toto’s perspective remains – although unfortunately it writes only in baby voice.

More like Adam Bant, right? (I am extremely sorry for this joke.) While Toto was busy canvassing, the Greens leader – on his own campaign trail – fielded a pop quiz from an unlucky reporter testing him on the wage price index. He responded with the three-word rebuke “Google it, mate” – followed, of course, by a screed against gotcha journalism.

Truthfully, however, he would not be on this list were it not for his other piece of viral buffoonery: an election TikTok posted by the Greens that appeared to show Bandt gazing longingly at a gargantuan Shrek twerking above Parliament House in a latex jumpsuit, as if they were long-lost lovers separated by tragedy. This video is, shockingly, safe for work.

Speaking of things that are shockingly safe for work: Cumdog, the nickname of Socceroos striker Jason Cummings, which trended briefly on Twitter in September – to much confusion.

Three months later and Cumdog is, of course, indelibly burned into the national consciousness, even as Australia’s fleeting hope in the World Cup has been extinguished. Like his teammates Big Harry Souttar and Martin Boyle, Cummings is Scottish, and acquired the nickname in a wrestling match in his home country. “I wrestled some guy called Grado,” he said in a Socceroos Q&A. “He came in and he was giving it the big one. So I chucked on the spandex, put Cumdog on the chest, and I battered him.”

Cumdingo is an acceptable variation.

The child who Scott Morrison tackled

Not to be outdone, the former Australian prime minister tried out his football skills earlier this year. It did not go well.

In news that was extremely Succession S1 (the one where Kendall Roy spends half the time trying to buy an online media website), in April the Australian announced it was launching a youth offshoot called the Oz. It went down exactly as expected, with all the grace of Steve Buscemi wielding a skateboard. The response online was brutal and swift, mocking the sheer brazenness of Australia’s most rightwing paper trying to appeal to teens with articles about “super hard maths”.

Actual teens, meanwhile, were certainly not reading digital media; they were too busy donning their Sunday best to pay respects to the cinematic marvel that was Minions: Rise of Gru – a film about an underclass of society’s discarded staging a revolution against their masters and breaking free of their chains. Such arthouse fare must be accompanied by suitable attire: it was an Australian teen who sparked the trend of arriving to Minions screenings fully suited and ready to hoot and holler every time their diminutive yellow idols appeared on screen.

“Everyone’s always loved a bit of Minions,” the meme’s originator deadpanned to Crikey. “They’re big on TikTok. So we thought it would be funny to chuck on some suits and go to a showing.” They called themselves gentleminions, and the trend went global. So much so that some cinemas around the world banned suited attenders from screenings altogether, citing the ruckus they created. Justice for gentleminions!

Any PR is good PR – as former Project host Peter Helliar learned on 22 April 2022 when he found himself trending – for supposedly being dead.

It’s unclear who started the viral rumour that Helliar had been killed in a car crash, although the earliest tweet is from a user with the name @hotcocked:

Waves of backhanded tributes soon followed, with people paying homage to an Australian presenter known by many, beloved by few. But rumours of the comedian’s death were greatly exaggerated. Helliar, on his part, responded to the brouhaha with a photo from the pub. “The afterlife goes OK,” he wrote on Twitter. “Not dead. Carry on.”

Also in misinformation: a megafan of the sibling rock trio Haim executed a note-perfect prank on Channel Seven, who ran a news segment covering Dua Lipa’s Sydney show in November, where a ticketing glitch caused chaos at the venue. Cribbing the name of his favourite band, Andrew Haim – as he went by – tweeted in jest that he had been dumped by his boyfriend over the concert fiasco.

Seven News latched on to the story, interviewing Andrew about his tragic tale. “Now I can listen to all of Dua Lipa’s heartbreak songs and properly identify with them,” he said, between shots of him looking sad on a park swing. Give this man an Academy Award.

The lions who escaped their enclosure

In 2020, it was baboons fleeing a vasectomy; this year brought us a majestic pride clawing their way out of their enclosure to go on the lam. They didn’t manage to break out of Taronga zoo itself – although they did trigger an emergency response during which overnight campers fled, unharmed, to a safe room. In many ways, the lions were an apt metaphor for 2022 itself: briefly, blissfully free from the previous years of doom, gloom and lockdown – before regularly scheduled chaos took hold once again.

Please enjoy the silliest meme of the year – courtesy of Ti West’s film Pearl, about a young girl who dreams of fame and goes off the rails trying to get it. “I’m a starrrrrrr!” Mia Goth drawls in this clip. “Emma Staurrrrnnnnn!” said everyone else.